Montalcino is a beautiful town of just five thousand inhabitants in Val d’Orcia, in the province of Siena. The splendid medieval village has as a background a characteristic landscape full of charm, for its green hills, ideal for spending an unforgettable weekend in Tuscany.
The history of Montalcino
Its history begins in the distant Etruscan era, when it was inhabited by small population groups. The first time we find the name of Montalcino in historical sources dates back to 814, in a document that legitimized the transfer of the area under Mount Lucini to the Abbey of Sant’Antimo, by the emperor Louis the Pious.

But the first real village of the town dates back to the 10th century, due to a migratory flow from the nearby areas, which extended until it assumed the definitive shape that we can still see today.
Montalcino enjoys a privileged position, as it is located on a hill that allows it to dominate the entire area below from above, providing it with a huge advantage from a military point of view, being able to control any attacks by invaders.

The Via Francigena also passed under the city of Montalcino, the important connecting artery that led from Rome to France. For this reason, both Siena and Florence were very interested in acquiring control over this small village and in 1260 the town was involved in hostilities between the two large cities.

Guelphs and Ghibellines alternated at the helm of Montalcino throughout the medieval period, placing the city within the internal struggles between the two factions. After a short period in which it became a Republic, governed by the Sienese nobles who fled their now fallen hometown, Montalcino was annexed to the Grand Duchy of Tuscany and continued to be part of it until the Unification of Italy in 1861.

Famous all over the world for the high quality Sangiovese Grosso grapes grown there, Montalcino is also rich in monuments of great historical and artistic importance, which attract visitors and tourists from all over the world. The fortress of Montalcino

The first original nucleus of the fortress of Montalcino dates back to 1200, on which a new castle was later built by Mino Foresi and Domenico di Feo. The elevated position of this building allowed a strategically favorable view for military defense. It was possible to control the immediate surroundings of the fortress, so as to prepare in time in case of enemy attacks.

Towards the middle of 1500 it was one of the fulcrums of the resistance of the nobles belonging to the Republic of Siena against the Medici family. On this occasion the part of the external spur was in fact erected. Today it is possible to visit the entire structure, so as to be able to admire the splendid panorama that can be seen from up there. 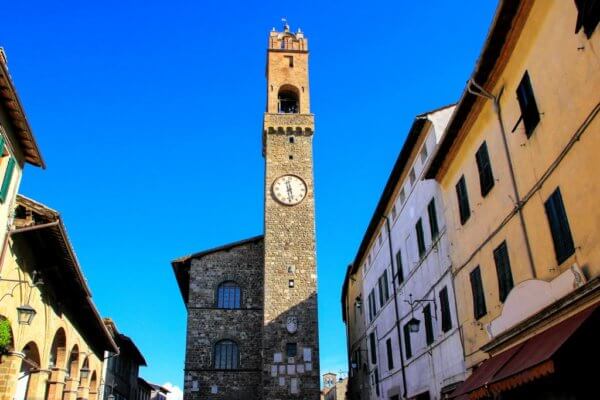 This wonderful historic building houses the headquarters of the Municipal Council of Montalcino, is located on the main square of the village, or Piazza del Popolo, which it dominates with its very high tower and marble coats of arms that recall the families who ruled here.

It dates back to the period between the thirteenth and fourteenth centuries and has elements that are very reminiscent of the style of architecture of Siena.
On the ground floor there is a portico composed of characteristic lowered vaults, where we can also find the statue of Cosimo I de Medici, the work of Giovanni Berti.

Civic and diocesan museum in Montalcino

Inside the former convent of Sant’Agostino we find a splendid Civic Museum. After several restoration operations, the municipal administration was able to bring together the Diocesan and Civic Museums, thus unifying everything in an interesting itinerary for the visitor from an artistic and cultural point of view.
In fact, in this museum it is possible to admire a collection that testifies to all the artistic production of Montalcino ranging from the distant Middle Ages to the contemporary era.

Museum of the Bottle and Glass

Since Montalcino is known to most people for its fine wines, a Bottle and Glass Museum could not be missing to learn something more than what you usually hear. Located inside the Banfi Castle of the Italian-American Mariani family, the Museum contains many objects that testify how glass technology has evolved, starting from the fifth century BC. C. until today.

Ancient bottles formerly used for wine, glasses and works always dealing with the same theme, adorn the exhibition rooms of this very particular museum structure which is strongly linked to the territory. It is even possible to admire a work by the well-known artist Pablo Picasso, or “the Bearer”, together with very precious Venetian glass artifacts. 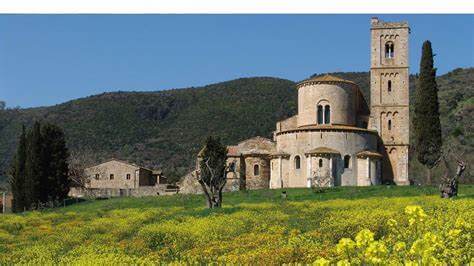 Of all the artistic beauties made in Tuscany that we can admire in Montalcino, the Abbey of Sant’Antimo is perhaps the most evocative. Located in an isolated area of ​​the Val d’Orcia, this splendid Abbey with a characteristic Romanesque architectural style is very reminiscent of the abbeys of Northern Italy.

According to a legend, it seems that it was built by Emperor Charlemagne who was traveling the Via Francigena to return to France after a pilgrimage to Rome. Since he risked contracting the plague due to the epidemic that was raging at that time, he made a vow to end this ugly evil that was spreading more and more. At the end of the epidemic, he had the Abbey built in the place where he had asked for pardon.

The structure we see today is not the original one, since it has been retouched over the years, until it was restored in 1992. Today it belongs to the order of the Canons of Sant’Antimo, followers of Sant’Agostino.

Tags: Best Things To Do, churches, city, Europe, Holidays, Italy, montalcino, things you should do, tuscany