The Alcazar, the Cathedral, the Monastery and the Synagogue are just some of the things to see in Toledo in one day, a beautiful city one hour from Madrid. Toledo belongs to the region of Castile – La Mancha and is known as the city of the three cultures. In fact, in this stupendous monumental city, there are clues to the three cultures that have characterized this area of ​​Spain: Christian, Muslim and Jewish.

Of all those in Spain, it is one of the few cities declared a Unesco World Heritage Site. In fact, at every corner there is a palace, a tower, a wall, an important archaeological remains. It is really difficult to fully visit Toledo in just one day, but we will try to summarize what we can see in 24 hours. Not far from Toledo is also Segovia, a city famous for its Roman aqueduct which is certainly worth a visit. 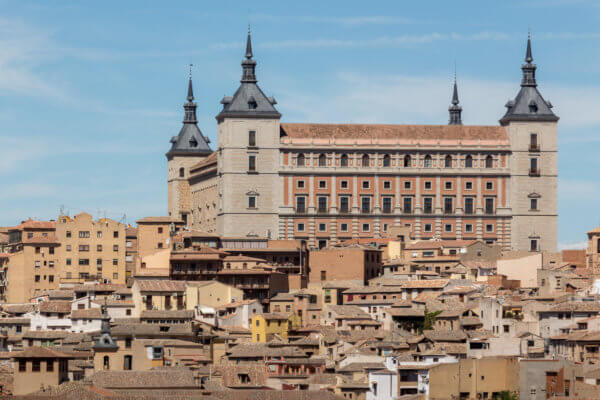 The Alcazar of Toledo

The Alcazar of Toledo is a building that first of all would appear to be massive. It is a rather austere construction that stands out in the historic center of the city. The building, as you can see it today, was built at the behest of Charles V, but it is still possible to appreciate how in ancient times the Romans and subsequently the Muslim population settled in this very place.

The Cathedral of Toledo

One of the characteristic streets that cross the center leads to the Town Hall Square (del Ayuntamiento). The Arzobispal palace and above all the cathedral overlook this beautiful esplanade. Toledo Cathedral has a majestic Gothic facade. This is, after the Cathedral of Seville, the second largest Gothic religious building in all of Spain. Built between 1226 and 1493, it also houses the baroque and neoclassical style. Other Christian religious buildings that deserve to be visited are the Baroque Church de los Jesuitas, the Salvador church, the 15th century Franciscan Monastery of San Juan de los reyes and the Church of Santo Tomé, the latter mainly because inside it houses one of the most famous works of El Greco: “El entierro del Conde de Orgaz”. Toledo is the only museum space in Spain dedicated to the painter El Greco. The museum is not in a typical setting, but the collection of paintings is located in a restored house in the Jewish quarter, that of the collector Don Benigno de la Vega-Inclán y Flaquer. A house-museum focused on the works of El Greco and the influence that this artist had in Toledo and beyond.
The restored house is of unique beauty. Every space in the house was taken advantage of to include works of art by El Greco and his followers. Among the myriad of works on display it is possible to contemplate: El Apostolado, San Bernardino, Vista y plano de Toledo, El Redentor and the portraits of Diego de Covarrubias and his brother Antonio.

The Jewish quarter of Toledo

After having seen the Moslem flies, the Christian cathedral must enter the third culture present in Toledo. As mentioned in the previous paragraph, there is an easily identifiable Jewish quarter in Toledo. In addition to the characteristic twisted streets of a judería, in Toledo it is possible to appreciate small 100% Jewish details. There was also a Synagogue in Toledo and in fact there are two: the Synagogue of Transit from 1366 which also houses a Jewish museum and the Santa Maria la Blanca Synagogue from the end of the 12th century, surprisingly decorated with very Arabic elements. .

A panoramic view of Toledo

Tags: Best Things To Do, churches, city, Discover Spain, Europe, Historical buildings, Holidays in Spain, One Day, One Day in a City