Lyon is a city that knows how to amaze and that offers many attractions not to be missed. So here are 8 points of interest that you really shouldn’t miss and that you can visit in two days. It is the heart of the city, the real pulsating soul with its immense spaces and elegant buildings. At certain times of the year, such as during the Christmas period, the beauty of the square is further enhanced by a large Ferris wheel that we were lucky enough to see despite having visited Lyon in February.

If you happen to be there at those times of the year, do not miss a romantic ride on the wheel: from there you can enjoy a beautiful view of the square and the surrounding streets, but above all of the Basilica of Notre-Dame de Fourvière which with its majesty dominates the homonymous hill. The undisputed symbol of Place Bellecour is the large equestrian statue dedicated to Louis XIV which was replaced in the 18th century after being destroyed during the French Revolution.

Few people know that the west side of the square hosts a beautiful statue dedicated to Anthoine de Saint Exupery, the author of “The Little Prince” who was born in Lyon during the summer of 1900. The peculiarity of the statue derives from the fact that it portrays the author next to his literary work and obviously some of the most well-known quotations of the book cannot be missing. 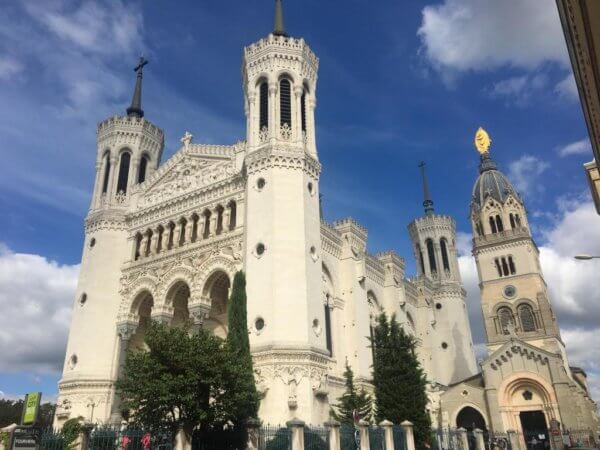 one dayone dayThe incredible beauty of this basilica alone is worth a trip to Lyon! It is no coincidence that it represents the apotheosis of Lyon’s pride and although visible from various points of the city thanks to its dominant position, when you arrive on the hill that hosts it, it is a unique emotion to find it suddenly in front of it in all its majesty, especially in evening.

Few people know that the hill that houses the Basilica of Notre-Dame de Fourvière is also known as “the hill that prays” due to the presence of various religious sites and in contrast to the “working hill” of the Croix Rousse.

Notre-Dame de Fourviére impresses with its mix of styles, a perfect union of the neo-Gothic, the classical and the Byzantine. The very rich tabernacle is characterized by ten winged angels, dominated by the statue of the Virgin Mary. Precisely the mosaics dedicated to her are the ones that inevitably struck us the most, a real riot of colors and details. Before leaving Fourviére, take some time to admire the splendid panoramic view of Lyon from the gardens of the Basilica. Both day and night it is a truly unique sight. The “Old Lyon” is the most evocative and ancient part of the city, with its medieval air that contains almost 2000 years of history. At the foot of the Fourvière hill, the old quarter protected by UNESCO as a World Heritage Site winds through narrow streets that express all their beauty in the famous traboules, or the covered passages that connect two buildings allowing you to pass through the other side without having to go around. The traboules are a unique feature of Lyon that better than anything else tell the history of the city. The first were built in the 1800s and had a purely practical function: to allow silk artisans to transport their fabrics without damaging them even in bad weather conditions. Over the years they also assumed a defensive function, especially during the Second World War, when they became the operational headquarters of the Lyon resistance fighting against the Nazis.

In addition to their undoubted practical function, today the Lyonnais work hard to preserve them in the best possible way and also make them beautiful to visit. Some are easily recognized along the way to the open door, while the peculiarity of visiting the center is given precisely by the possibility of finding those that are closed, as they are private, and ring the bell. Often the inhabitants open to allow tourists to take a look. In our case, we were lucky enough to meet a really welcoming Lyonnais who allowed us to enter and take some photos. If you want to go without fail, those officially open to welcome visitors are located in rue St Jean 54 towards rue du Boeuf 27, in rue St Jean 27 towards rue des Trois Maries 6 and finally from place du Gouvernement to quai Romain Rolland.

La Croix Rousse is called the “working hill” because it once housed silk weavers, the so-called canuts in French. The neighborhood was in fact the site of the ancient craft workshops and for those who want to take a dip in the past there is the Maison de Canuts, the museum that traces the most important historical moments of the neighborhood. The peculiarity that struck us most of the Croix Rousse is the Wall of the Canuts, the largest and most famous mural in the city made of trompe-l’oeil that entirely covers the facade of a building, creating an incredible perspective effect. Seen from a distance, in fact, it is difficult to distinguish its details from the real and actually existing ones of the surrounding buildings! Not surprisingly, Lyon is often considered a painted city as murals have always been part of its history. Here a stop is a must, not only to closely observe the majesty of the Hotel de Ville which now houses the Town Hall. Unfortunately, the interiors can only be visited on the occasion of the National Heritage Days, but the view from the outside is undoubtedly worthwhile.

On the left side of Place des Terreaux, the fountain by Bartholdi immediately catches the eye, the sculptor known for having taken part in the creation of the Statue of Liberty. Impossible not to notice the majesty of this work: in the center stands the body of a woman representing France, while the 4 horses that stand out at her feet recall the 4 most important rivers of the nation.

South of the square, art lovers will be able to admire some of the most beautiful works by Renoir, Monet and Cézanne in the Musée des Beaux-Arts, one of the main museums in France and Europe. Inside a splendid seventeenth-century building, its 70 rooms show visitors works ranging from Antiquity to Modern Art.

Tags: Best Things To Do, churches, France travel, holiday in france, LIONE, museum, One Day, One Day in a City, one day LYON, Visits to castles