Leonardo was highly appreciated by the French crown, with whom he had excellent and lasting relations, enjoying the admiration and esteem of the various kings of France.

When he decided to leave Rome in 1517, he was hosted in the manor of Clos Lucé near Amboise, and received a rich pension as “premier peintre, architecte et mechanicien du roi”.

It is said that the manor was connected to the castle of Amboise, the King’s residence, through an underground passage, in order to allow Francis I of France to visit Leonardo at any time, without being noticed. However, the excavations carried out have not revealed its existence. On moving to France, Leonardo brought with him several works by him, already begun in Italy, including the Leda with the Swan and the Mona Lisa, his most famous painting. It was in Amboise that Mona Lisa’s smile was shown for the first time to an interested person, the Cardinal of Aragon, who appreciated it very much precisely for his enigmatic beauty.

In France Leonardo also brought many notes and manuscripts with him. Now elderly and limited by paralysis in his right hand, he continued his anatomy studies, also dedicating himself to architecture and scenography for court parties.

Very famous was his lion automaton, a finely designed mechanical structure, which represented a lion able to walk, whose chest opened to release flowers in honor of King Francis I. Always for the King, he created the Feast of Paradise , whose machinery made it possible to evoke the race of the stars in the sky.

In this last period of his life, Leonardo imagined the end of the world, as evidenced by some of his latest drawings. In them Leonardo represented a fantastic event in which the forces of nature studied by the artist during his entire life operate with logical coherence and with terrible beauty. 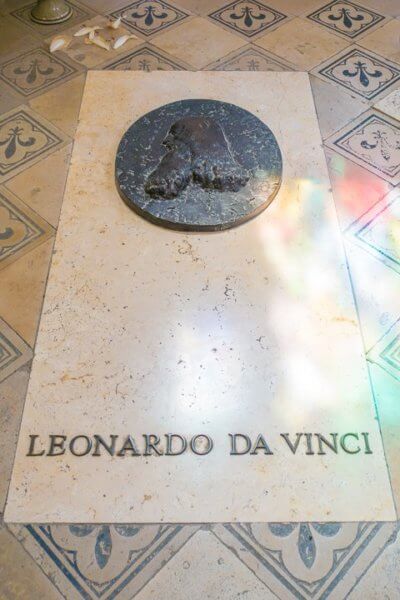 On 29 April 1519 Leonardo laid his will and died on 2 May. After various vicissitudes, in 1874 the remains of the master were placed in a tomb at the castle of Amboise, in the chapel of Saint Hubert where today is the commemorative plaque.

The Clos Lucé manor houses a park-museum dedicated to the genius of Leonardo. In addition to visiting the environments in which he spent his last years of life, it is possible to see about forty machines built according to his projects, such as the siege bridge, the tank and the precursor of the helicopter, as well as installations that recall the his studies of botany and hydraulics.

The tomb of Leonardo da Vinci is located in the Saint-Hubert Chapel, located outside the main body of the Castle of Amboise. The alleged remains of the Italian genius, who lived in the French town in the last years of his life and which the locals call without hesitation ‘Leonard’ (in French), are placed in a small flamboyant Gothic-style building, adorned with hunting scenes. The lintel of the entrance portal is a representation of the divine apparition which Hubert witnessed during a hunting party.