The Learned, the Red, the Fat: this is how Bologna is defined, the capital of the rich Emilia Romagna. La Dotta for the presence of one of the oldest universities in Italy which still continues to attract Italian and foreign students and maintains its role as a very active cultural center. Bologna the Red for the color that the roofs and houses give to the city, keeping alive the typical colors of the medieval era.

Bologna la Grassa for its tasty and sublime gastronomy: Bolognese cuisine is known all over the world and has conquered even the most severe palates. Obviously Bologna is not only this: for example it has extraordinary places of the spirit, such as the church of San Luca which can be reached by crossing 6 km of arcades or the complex of 7 churches, spectacular and beautiful, the church of Santa Maria with the extraordinary “Lament”. Most of the places of interest are located in the center of Bologna, so there is no need to travel by car or public transport. In short, Bologna is one of the most beautiful Italian cities and easy to visit, of which we recommend the 6 things to do and see during an itinerary of 1, 2 and 3 days.

The beating heart of the city, Piazza Maggiore (or Piazza Grande as the Bolognese call it and Lucio Dalla sang it) is the center of civil and religious life in Bologna. It is famous for the Fountain of Neptune, overlooked by the most important buildings of the medieval city: to the west the fourteenth-century Palazzo Comunale, to the east the sixteenth-century Palazzo dei Banchi and to the south the imposing Basilica of San Petronio in front of which the elegant Palazzo del Podestà.

All buildings that testify to the history of the city, a history that began in 1200 when the people felt the need to equip the city with a space to be used as a market. All the buildings that made it up were purchased by the Municipality and then demolished and only in the fifteenth century did Piazza Maggiore take on the austere form it still retains today. Despite its historical importance, it seems that the square brings bad luck to the students who attend the famous University of Bologna. According to the legend, you should never cross the square through the center, but always walk along it, because otherwise you can say “Goodbye” to the much sought-after degree.

Basilica of San Petronio in Bologna

It is the last great Gothic work made in Italy, in the form of a Latin cross with three naves and chapels. Do not miss the Bolognini Chapel frescoed with the Stories of the Magi, the Last Judgment on Heaven and below, Hell with an extraordinary and gigantic figure of Lucifer and the representation of the Prophet Mohammed in Hell. The Basilica of San Petronio belonged for a long time to the Municipality which used it for the most varied purposes: place of ceremonies, court, public meeting place; only in 1929, following the Lateran Pacts, did it become the property of the Diocese. If you go to visit the Basilica of San Petronio, you cannot help but notice the Sundial built by Cassini to demonstrate that it was the Earth that revolved around the Sun, and not vice versa as was believed of the time.

Do not miss a climb to the new panoramic terrace from which you can admire the roofs and monuments of Bologna from a height of 54 meters. Luckily you go up with the elevator! Also part of the Basilica is a small museum with a few rooms that tells the story of the construction of San Petronio and collects sacred objects from the basilica. The Asinelli Tower in Bologna

The towers of Bologna are one of the hallmarks of the city. Of the many towers that were built between the 12th and 13th centuries, less than twenty remain today. These structures had both a military and a noble function: they gave prestige to the family who ordered their construction.

The two most important towers are that of the Asinelli and the Garisenda. The Asinelli Tower was built between 1109 and 1119 by the family of the same name who, in addition to receiving social prestige, used it for military defense and sighting purposes. In fact, in 1448 the tower was equipped with a rocchetta to accommodate the soldiers on guard.

Currently the arches of the portico of the rocchetta house some workshops of artisans, in memory of the commercial function that the city carried out in the Middle Ages.

Visitors, after having walked the 498 steps of the internal staircase, can reach the top of the Asinelli Tower which, from a height of 97.20 meters, allows you to have the red city at your feet. On fine days, the view can reach the sea and the Prealps of the Veneto. The Garisenda Tower is lower (47 meters) and cannot be visited. 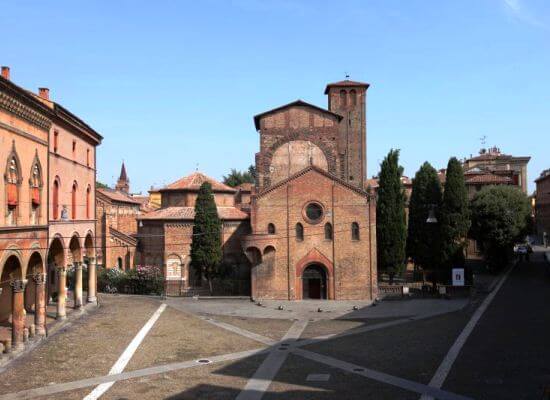 The Basilica of Santo Stefano in Bologna

All very ancient buildings which, even if they date back to different eras, maintain a certain stylistic homogeneity, making the complex the most interesting and best preserved Romanesque monument in Bologna. It is likely that the original project of the complex dates back to the 5th century when Bishop Petronius, after a trip to the Holy Land, wanted to reproduce the sacred places of Jerusalem in the Emilian capital. Over the years, the modification and restoration works have changed the ancient appearance of the complex, reducing the number of the original seven churches to four. The Archiginnasio is the most beautiful building in Bologna and certainly one of the most beautiful in Italy. Usually the hasty tourist passes in front of the front door throwing only a distracted glance at the central portico.
Instead, a few steps are enough to be amazed by a long portico with 30 arches decorated with hundreds of coats of arms and two loggias on the upper floors. The Archiginnasio was commissioned (1563) by Cardinal Carlo Borromeo.

The goal was to give the University of Bologna, the oldest in the world, a single, beautiful venue. This palace was a place of teaching until 1838 to make room for the library. Going up the stairs you will find 10 classrooms (not open to visitors) and the Library, which can be accessed for study but not for tourist visits. The two lecture halls that once housed Artists and Lawyers (Stabat Mater) are beautifully decorated.

The vaults, the walls of the rooms, the stairways and the arcades are covered with coats of arms, inscriptions and monuments that celebrate the masters and students who passed through the Archiginnasio classrooms. Do not miss a visit to the Anatomical Theater, destroyed by bombing in 1954 but entirely and perfectly reconstructed with the original materials. A curiosity: during the allied bombings on Bologna the palace was severely damaged. The Fascists, to make propaganda, wrote “Opera dei Liberatori” at the entrance to the door, to convey the message that the destruction was the fault of those who wanted to free Bologna from the Nazi-Fascists. The writing is still visible.

The National Picture Gallery of Bologna

The initial nucleus of the collection was a large donation from Monsignor Francesco Zambeccari; Over the years, then, the heritage has been enriched with donations from private individuals, bequests and state acquisitions to make the Pinacoteca one of the most popular and well-known national galleries in Italy and abroad. It has thirty exhibition rooms plus a space entirely dedicated to temporary exhibitions and educational activities. The Pinacoteca di Bologna, in addition to carrying out a purely exhibition function, deals with the protection, conservation and study of all the regional and city artistic heritage.

What to eat in Bologna

The gastronomic fame of Bologna dates back to the Middle Ages, when the influx of students and professors from all over the world made it necessary to enrich the gastronomic culture. Bolognese cuisine, like that of Emilia in general, is varied and abundant. In addition to the famous tortelli, still prepared by hand by expert pasta makers and strictly served in broth, egg pasta and pork are the protagonists of the tables, and from the different combinations of these two elements some typical dishes are born. ragù, prepared with mixed pork, veal and beef; tagliatelle, prepared with flour and eggs; lasagna, seasoned with alternating layers of meat sauce, béchamel and parmesan and the Bolognese cutlet, covered with cheese and a slice of raw ham. Mortadella is also born from pork, a typical cured meat from which not only the filling for tortelli is obtained, but also a foam to be used as an accompaniment for canapes and croutons. Among the desserts, the famous Carthusian must be remembered: it is a Christmas cake prepared with honey, almonds, candied fruit, pine nuts, butter, raisins, cinnamon and dark chocolate. The food is good everywhere, but if you love young people and the evening life, your destination is the “Quadrilatero” around Piazza Maggiore. Also not to be missed is a visit to FICO, the commercial center of Italian food of excellence that can be reached by bus from Bologna station. Take into account that it takes at least half a day to shoot it all.

Tags: Best Things To Do, churches, florence, Historical buildings, Holidays, museums, Squares, things you should do, tuscany, tuscany wines, WHERE TO EAT & DRINK